Earnewâld is a village on the water. It was founded next to the Earnewâldster Wiid lake after the Middle Ages. In the centuries when traffic and transport mainly took place over the water, the village was well connected.
The “Tegenwoordige Staat van Friesland” (Current State of Friesland) of 1786 reported: “The smallest and most remote village in the entire Grieteny (district). The church of this village has a squat tower, and very few houses around the church, with in total just 13 registered electors. There is no road leading to this village, which means it is only possible to get there by land in a dry summer by crossing the low lands of Garyp. However, by boat the trip is very convenient and pleasant due to the fact that all ships from Drachten, Oudega, Smallenee and Beetsterzwaag must pass by in order to reach Leeuwarden via Wartena.” It was only after the Second World War that a road leading to the village was first constructed.

Earnewâld was once predominantly a village of fishermen, sailors, farmers and reed cutters. The statue of the Ielfisker serves as a reminder of the ancestors of present-day Earnewâld. “Ielfisker” means eel fisher in Frisian. The statue is made of lava stone and can be found on the northern side of the marina.

Earnewâld is a real ice skaters' village. The sheltered watery environment lends itself very well to ice skating on natural ice in the winter. Earnewâld is often the first when it comes to organising tours on natural ice. When the ice is strong enough, the village organises one of the classic natural ice tournaments. A skating statue celebrates this. This statue, which portrays three winners of the classic natural ice tournament “100 fan Earnewâld” skating in a row, floats on the water opposite the harbour.

After the last otter was killed by a car in 1989, otters were once again introduced into De Alde Feanen National Park in 2011. In recent years, the population has slowly expanded. The presence of these animals is a source of great pride the conservation organisation “it Fryske Gea”. A statue of an otter can be found next to the old locks.

The “Gereformeerde Kerk” (Reformed Church) was built in 1906. The church has a very special pulpit in the shape of the bow of a skûtsje (a type of Frisian sailing cargo boat). The “Nederlands Hervormde Kerk” (Dutch Reformed Church) was built in 1794, with a pulpit from 1699. The coat of arms of Earnewâld, an eagle with two heads, is carved into the pulpit. The starting times of the services can be found next to the entrance. 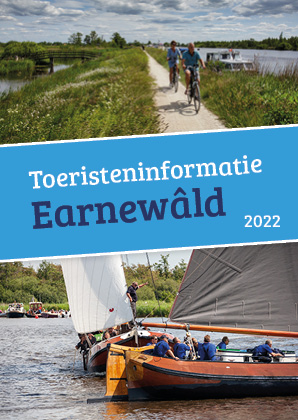